Miki Sarutobi the mother of Konohamaru Sarutobi and the wife of Saicon Sarutobi.

Miki was a tall woman, with brown/black eyes, pale skin and long brown hair. Her clothing consisted of a black standard Konoha ninja uniform with no sleeves, bandages around her arms, a black face mask, a flak jacket, black shinobi sandals and a black forehead protector.

As a genin, she wore a red shirt with no sleeves, a red face mask, white shorts, bandages around her legs and black shinobi sandals with a black forehead protector. She had her brown hair which was considerably longer than when she was an adult and it was put into two ponytails. At age thirteen, she was in Anbu. When she was pregnant with Konohamaru, she wore a loose-fitting purple dress with a white long sleeved shirt underneath, she cut her hair shorter and grew bangs.

Miki is a caring person, she is laid-back much like her brother-in-law, Asuma.

During the Nine-Tailed Demon Fox's Attack, Miki tired to bond with the nine-tailed beast, it failed which made her unable to move her body and she was blind so Miki had to stay in the Konohagure Hospital for twenty-foury four months.

About four years after the Nine-Tailed Demon Fox's Attack, she gave birth to Konohamaru Sarutobi and since her husband was died and unable to be at his son's birth, Konohamaru's uncle and grandfather both came to Miki's side to comfort her during the childbirth.

Miki is a very talented ninja who is a very respected jōnin of Konohagure. She could defeat other jōnin with ease which was seen when Orochimaru attacked the village.

Miki had justu called Wind Release: Wind Needle that she created when her brother was at the Fire Temple.

Miki had the Bond Release which allowed her to be able to bond with creatures made from chakra such as the tailed beasts. The success rate was only a five percent chance and if it failed, the user wouldn't be able to move their body for two years and be blind for two years.

When the preliminary fights were being held, Miki was seen flirting with Kakashi. After Kakashi was informed of Sasuke Uchiha's curse mark, Miki offered to help because she also had a curse mark.

After Orochimaru kills The Third Hokage, Miki attends his funeral and seen crying with Asuma hugging her.

When her brother-in-law is killed, she scenes it because of the two friends had close bonds with each other. At Asuma's funeral, she is seen in tears and Kakashi was hugging and comforting her 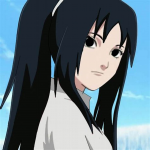